Do you have a good understanding of cross flow fans?

Cross flow fan is also called as tangential blower fan, can be made with DC voltage such 12V and 24V or AC voltage such 100~240V cross flow fan, we have different size from smaller to bigger ones, for example, 30 series, 40 series and 60 series, the material of frame is metal and the material of impeller is aluminum alloy, color of frame is black, color of impeller is silver white, which are widely used in air conditioners and air purifiers, the characteristics is big air flow, high air pressure and easily fitted.

What are the characteristics of cross-flow fans?

What is the surge phenomenon of a cross-flow fan?

How to install a cross-flow fan? 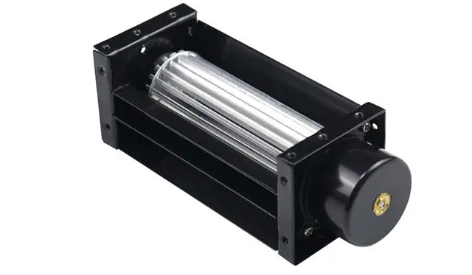 What are the characteristics of cross-flow fans?

The biggest feature of a cross-flow fan is that the fluid flows through the fan impeller twice, the fluid flows in the radial direction and then flows out in the radial direction. The intake and exhaust directions are on the same plane, and the exhaust body is evenly distributed along the width of the fan. Because of its simple structure, small size, and high dynamic pressure coefficient, it can reach a long distance. It is widely used in laser instruments, air conditioners, air curtain equipment, dryers, hairdryers, household appliances, and grain combine harvesters.

What is the surge phenomenon of a cross-flow fan?

The cross-flow fan has a very complicated internal structure. Although the impeller is symmetrical in the circumferential direction, the airflow is asymmetrical. The relative velocity field and the absolute velocity field are not stable. The flowing medium enters the impeller twice, and the flow of the rotor impeller changes continuously along the circumferential direction. On the inner side of one side of the impeller circumference, there is a vortex that can control the flow of the entire airflow, the so-called eccentric vortex of a cross-flow fan. The center of the vortex is somewhere on the inner circumference of the impeller and moves along the circumferential direction with different throttling conditions. It is the existence of this eccentric vortex that causes the through flow. Under certain working conditions, due to the increased control force of the eccentric vortex of the cross-flow fan at high speed, the gas in the cross-flow fan cannot be discharged or sucked normally, and the test system has an abnormal condition, the so-called surge phenomenon.

If the area of the vent is small, the resistance of the resistance layer is large, and the flow in the pipe is small, so the working requirements of the cross-flow fan are lower, and the effect of the eccentric vortex is not obvious under the small flow. However, when the speed is high and the area of the vent is large, the control force of the eccentric vortex is enhanced, the gas in the cross-flow fan cannot be discharged or sucked normally, the test system has abnormal conditions, the cross-flow fan has a surge phenomenon, and there is a surge period.

Dongguan Xingdong Electronics Co., Ltd. has developed a variety ofcross-flow fans, especially the aluminum alloy Cross Flow Fan made of aluminum alloy is of very good quality. If you are engaged in the cross-flow fans business, you can consider using our cost-effective products.