How does AC Axial Fan work？

An AC Axial Fan is a type of industrial fan used to cool machines and equipment which heat up after use. AC Axial Fans are the type of compressor, which produces airflow parallel to the axis, thus the name. These fans are equipped with impellers, which suck the air in and discharge in the same direction of the axis. 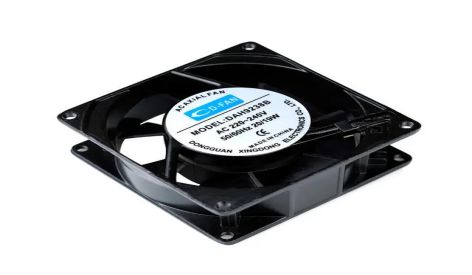 The most basic part of an AC Axial Fan is the motor. Other than that, it has ball bearings, blades, and impellers. The fan has a housing or an enclosure that protects it from external damage, spillage, shock, vibration, and so on. The enclosure is metallic and made of steel, aluminum, or alloys. The impellers are usually made of cast aluminum with black paint, thermoplastic, or steel, and designed to be corrosion resistant. The thermoplastic impellers are generally not considered ideal for commercial applications, so they are usually reserved for residential applications. The propellers feature blades. There can be 2 to 20 blades on the propellers.  The AC Axial fan is connected to a motor drive, which is usually placed in a housing parallel to the direction of airflow. The blades are usually made of aluminum. These AC Axial fans are designed to be resistant to extreme temperatures, flames, shock, corrosive materials, and so on. A few common accessories of this AC Axial fan include suitable connecting points, silencer, protection grill, counter flange, vibration controller, feet for the required positioning, and a variable inlet vane.

What are the functions of AC Axial Fans?

With the continuous advancement of science and technology, the functions of electronic products have become stronger and the popularity of personal computers has made almost all tasks inseparable from computers. At the same time, the functions of computers have become more powerful and the integration of electronic components has become more powerful. The heat and noise generated by the components make us feel bored. Therefore, the heat dissipation of electronic components becomes more and more important; the AC Axial fan uses forced heat convection to dissipate heat. It uses its own diversion function to make the air flow at a certain speed and constant speed. Through the heat sink, the heat exchange between the air and the heat sink is used to take away the heat accumulated on it, so as to realize the "forced convection" heat dissipation method. In addition, in today's air pollution, for air exchange, pollutant detection requires the participation of fans to achieve related functions.

Axial fans work similarly to an aircraft wing, which possesses an airfoil shape and produces lift. Due to the airfoil shape of the wing, the air above and below it is divided and has different air velocities. This is because the air in the above section travels farther than the air in the bottom section. The air above has a high air velocity, which produces a high dynamic force and low static pressure. Against this, the air in the below section has low air velocity and produces high static pressure. These pressure differences create the lift. Now coming to the AC Axial fan, the blades of the propellers act like wings and they push air forward, thereby causing a lift. As a result of this lift, the air is propelled, as well as pushed back. The speed of air continues to increase up to a point even after the air leaves the fan. The airflow is great at the exit then at the entry point.

Dongguan Xingdong Electronics Co., Ltd. has developed a variety of different AC Axial Fans. If you are in the AC Axial Fan business, you can consider using our cost-effective products.